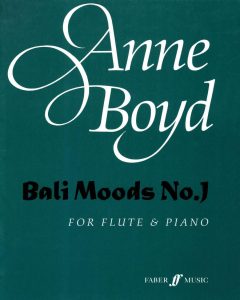 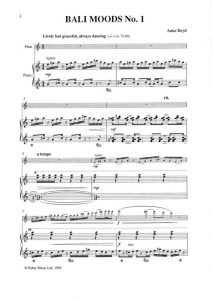 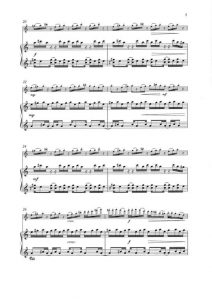 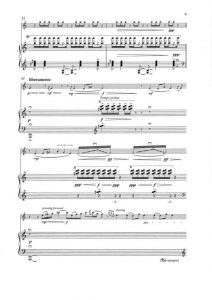 Anne Boyd’s Bali Moods No.1 for flute and piano takes as its starting point traditional Balinese gamelan music and is written throughout in an equally-tempered version of the pelog scale, one of the two predominant scale systems associated with Indonesian music.

Anne Boyd’s Bali Moods No.1 for flute and piano takes as its starting point traditional Balinese gamelan music and is written throughout in an equally-tempered version of the pelog scale, one of the two predominant scale systems associated with Indonesian music. The moods of the title are also meant to imply modes.

Bali Moods No.1 is the first of a series of three works for flute and piano by Anne Boyd to explore the varied characteristics of Balinese moods and modes.

Born in 1946, Anne Boyd wrote her first compositions as a little girl growing up on a remote Outback sheep station in Central Queensland where her only music teaching was via ABC Radio and a recorder book sent to her by her sister Helen. Later a flautist, she studied under Victor McMahon at the Sydney Conservatorium (1960-64). She majored in Music in the University of Sydney’s Faculty of Arts (1963-67) where she became a student of Peter Sculthorpe in 1963. Through Peter, who remained her most special friend, she inherited a lifelong fascination with the musical cultures of South East Asia, especially Japan and Bali. She regards the ancient court music of Japan as seminal influence, the closest musical representation of the Outback landscape of her early childhood.

Regarding her composing as essentially spiritual, she is much interested in the idea of music as meditation; a means of changing states of consciousness. Her music is based on the intersection of Christian Love with Buddhist silence.

Anne Boyd’s best known compositions include the choral work As I crossed a Bridge of Dreams (1975) and the meditation for solo piano Angklung (1974), one of several works written for pianist Roger Woodward which anticipated the advent of musical minimalism. Other works written for Roger include As it leaves the bell (1973), Book of the Bells I, II and III (1980/98) and the song cycle for voice and chamber ensemble Meditations on a Chinese Character (1996). Kabarli (Dawn), a test piece of the 2012 Sydney International Piano Competition, is dedicated to ‘Roger on his 70th Birthday’.

Other well-known and much performed works for flute and piano include Goldfish Through Summer Rain (1979), Red Sun Chill Wind (1980), Cloudy Mountain (1981) and Bali Moods I (1987) and II (1988); some of these works have been rearranged for other instrumental combinations including shakuhachi and harp.

Her more recently commissioned works include Ganba for baritone saxophone and piano (2011) and String Quartet No 3 (2015) for the Huntington Festival, a memorial tribute to her beloved friend Peter Sculthorpe.

Boyd’s music is published by Faber Music (London) and the University of York Music Press. In 1997, ABC Classics produced a disc solely dedicated to her work, Meditations on a Chinese Character, the royalties from which were dedicated in support of the Australian Women’s Music Fund. In 2000, Tall Poppies released another disc of her music, Crossing a Bridge of Dreams.

Professor Boyd was honoured with an AM in the Order of Australia in 1996, an Honorary Doctorate from the University of York in 2003, the Distinguished Services to Australian Music Award at the APRA-AMC Classical Music Awards in 2005 and the 2014 Sir Bernard Heinz Award for service to music in Australia.

Be the first to review “Anne Boyd – Bali Moods No. 1 for Flute & Piano” Cancel reply