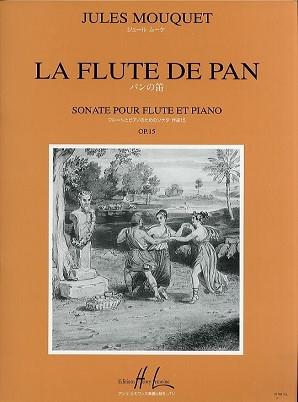 An excellent example of a neoclassical work, Mouquet’s La Flûte de Pan was written in 1906 and influenced by Greek mythology.

An excellent example of a neoclassical work, Mouquet’s La Flûte de Pan was written in 1906 and influenced by Greek mythology.

Pan is the legendary Greek god of shepherds, who has the physical characteristics of both a goat and a human. In one story, Pan chased a nymph named Syrinx because she ran away before he could give her any compliments. He chased her to a riverbank, where she transformed into reeds. All Pan could do was take some of the reeds and make an instrument out of it, which is why he is commonly associated with the flute.

The first movement of the work, Pan et les Bergers (“Pan and the Shepherds”) has an energetic but pastoral quality. Flourishes of notes evoke images of a shepherd’s busy day in the mountains.

The 2nd movement, Pan et les oiseaux (“Pan and the Birds”), depicts a solemn setting with the occasional bird call ringing through the air.

Finally, in the 3rd movement, Pan et les nymphes (“Pan and the Nymphs”), an upbeat dance breaks out with a balance of technical and lyrical passages, painting a scene where the mythological spirits of nature frolic and dance in the woods.

The composer Jules Mouquet was born in Paris on 10 July 1867. He studied harmony and composition at the Paris Conservatoire before being awarded the Grand Prix de Rome in 1896 for his cantata Mélusine, followed by the Prix Trémont in 1905 and then, in 1907, the Prix Chartier for chamber music.

In 1913 he was appointed professor of harmony at the Paris Conservatoire, and wrote a Cours complémentaire d’harmonie.

Most of Jules Mouquet’s compositions are for wind instruments – flute, oboe, clarinet and saxophone – and his best-known work remains the symphonic poem La Flûte de Pan op. 15 for flute and orchestra. He also wrote oratorios, including Le Sacrifice d’Isaac and Le Jugement.